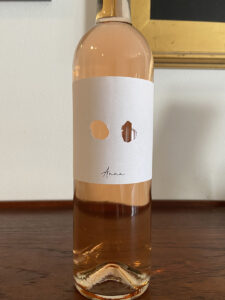 Pairs with Cheez-It’s: makes everything more crisp and sharpen

I’m asking all of you to PLEASE watch “I Hate Everything About Wine”, a very short documentary on Gönc Winery. Just going to say it, I’ve never met this man, but I think I’ve just fallen in love with Peter Gönc within over 5 minutes of video. He hated wine because as a boy because his dad kept him working in the vineyard while all the other kids got to go out and play, so when he had his chance to head in a different direction he just took off only to realize later…maybe it’s not so bad after all. On return he realized whoops, he didn’t know how to make wine, so he just Googled & Youtubed. He somehow is like a natural wine Jedi Master or DJ. He feels what is right, and oh boy does it work. While he’s alone in the cellar, rock music keeps him company. One day he just wrote Starman on a barrel and it went from there. Names began to mesh with the labels, so you’re drinking his groove. Albeit the two I had weren’t from that series. Instead I got a UFO abduction and this one “Anna” named for his grandmother. Guess that means I’m going to have to pick up more asap to spin with some Bowie. ⚡️Peter you seriously rock!