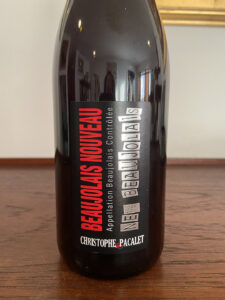 Light young garnet. Open that door and release that touch of barn that runs out the yard. Next are aromas of cinnamon, plum, raspberries, cloves, and cherries. Taking the first sip and there’s more of that plum with a touch of sharp twang, chocolate, cherry (but not chocolate covered cherries), smoke, a ping of orange, and oddly blueberry and mango.

Christophe Pacalet did have wine in his blood but took on a stint of biochemistry and cooking before returning to Beaujolais to learn from his famed (Morgon) uncle Marcel Lapierre. Who better to guide him along this path. Christophe has taken the route of renting instead of purchasing a vineyard. This gives him a chance to work with old vines and pick from the best. Yes, there’s less grapes, but better wine in the end. Have to add, this is a great wine for southern food. Seriously, it is. It went fab with my potato salad with hot peppers and capers. Also would work well with a good homemade fried chicken, especially the legs and thighs. Just remember, as I was taught by my mom…if you want good fried chicken soak it in salt water in the fridge over night. Don’t forget to make a side of jalapeño cornbread and mustard greens doused in hot pepper vinegar too, for a delicious evening you aren’t soon to forget.