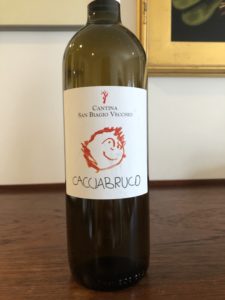 Color deep rich orange tinted gold due to the 8 days of skin contact. After admiring this gorgeous glass, breathe in orange zest, a little ginger like a gingerbread cookie, honeysuckle, flowers, and apricots. First sip and it’s very floral and then there’s melon, honeysuckle and downright honey. There’s also again delicious apricots and something a little bitter like an almond. This wine has such a heady enchanting mystical fairy-kissed richness.

Pairs with Cheez-Its: Weeds out any almond or bitter. Just an explosion of flowers.

As I read about Cantina San Biagio Vecchio, Andrea Balducci named Cacciabruco after his daughter’s favorite song (well, it was her favorite song when she was 3). I have to say, it’s a whole lot better than Baby Shark. Let’s all dance and hunt that caterpillar.

Andrea and Lucia Balducci’s Cantina San Biagio Vecchio (from what I’m finding) is not just an organic winery, but they also grow the wheat Gentil Rosso. Gentil Rosso is an ancient grain that’s a soft wheat, which is great for cakes and pastries. The vineyards are situated in beautiful hills near the medieval Torre di Oriolo. The tower started out as an old castle that was transformed into a hexagonal military fortress in the late 1400s. Over the years it had been pillaged then restored, used as a dwelling for sharecroppers, in WW2 it became a place of for the citizens of Faenza to ride out bombings, and now restored again, it is a public place where you can a enjoy wine tasting, a night of music under the stars, or the wedding of your dreams.

Branching out to the Emilia-Romagna region. A 30ish minute drive from Faenza is Dozza, a town well known for their murals. The last Biennale del Muro Dipinto was in September 2019, and the town walls are the artists’ canvas. The works, new and old are so diverse in styles and content, but each has their own form of beauty.

Another 35 to 45 minute drive from Faenza is Ravenna. Ravenna is not so far from the Adriatic Sea and has eight monuments that are UNESCO Heritage sites. Each are spectacular, but the one that grabs me is the Mausoleum of Galla Placidia. The mosaics are breathtaking. I just get lost in the arrays of blues and a sense of peace from the ceiling mosaic “The Garden of Eden”. “The Good Shepherd” is amazing in its own rights too. I have to say the sheep do look a bit pissed off by the shepherd. Ha! Seriously though, I truly have to find a way to get here when we can travel again.