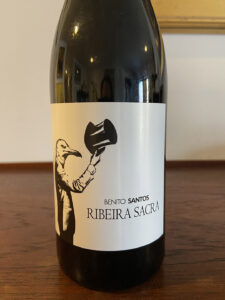 Bodega Benito Santos
Mencía 2017
Ribeira Sacra
100% Mencía
Galicia, Spain
Vineyards in DO Monterrei (according to the label and website)
Winery in Ribeira Sacra DO
Sustainable farming

A beautiful shining garnet glass. At first there’s a buttery start that eases into scents of berries. Next are flowers that turn into roses. Reminds me of my mom’s rose garden. She had an array of types, colors, and some antique wild ones. It was planted on a small incline in a horseshoe shape so you could enjoy it just surrounding you and breathe in all the fragrances. One last thing on the tip of my nose is light smoke. Sipping tart and smooth black cherries, strawberries, blackberries, even maybe blueberries and still drinking roses. There’s a dark spice finish yet it’s still light and lively. Delicious elegance.

Pairs with Cheez-It’s: juicy cherry and pop of roses

Here’s a little history on the winery’s founder, Benito Santos…he started out working in his grandfather’s vineyards back in the 30’s and became a huge backer of the region’s Albariño. Over the years of hard work, great achievements and awards, he became a member of the Specific Regulatory Council of Rias Baixas (1981). By 1988, he greatly helped in the creation of Rias Baixas D.O. That’s a pretty historic accomplishment. Now Bodega Benito Santos has been passed on to successors, land has expanded and other grapes have been added such as the Benito Santos Mencía from this lovely wine. All the roses that kept blooming from this bottle took my thoughts to my personal favorite rose tune, by Nick Cave & The Bad Seeds ft. Kylie Minogue.