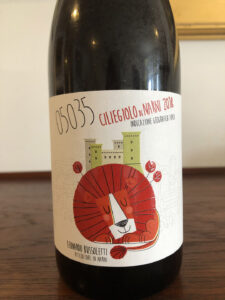 Deep ruby color but shining like a piece of stained glass window. Scents of cherry, roses, a mellow berry, and a pinch of cola. Flavors of dark and sweet cherries, strawberries, raspberries, and blackberries with their seeds included to give a little good bitter kick

Chill it a little, it’s really good that way. This is your summer red.

When I first looked at the label with the lion and the name of the town being Narni, I immediately thought of C.S. Lewis’s Chronicles of Narnia. Even if C.S. Lewis never set foot in Narni (previously named Narnia), he did discover it in an atlas, underlined it, and told his biographer (Walter Hooper) that the name had inspired his magical realm. In 2009, Walter sent the same atlas to Narni’s local historian (Giuseppe Fortunati), so it all comes full circle. How cool is that! Narnia was a place I spent many hours in my childhood visiting through the pages of his wonderful series, and now I get to travel there by glass.

Another image on the label is Narni’s square fortress Rocca Albornoziana. It looks like it could have fallen out of C.S. Lewis’ world or even GOT. There’s four towers, a moat, and a second wall of protection. You would seriously need a dragon to get past all that. It’s also been a home to popes (one holed up in there to escape a plague), military officials, and in 1906 a Russian prince, when he bought it for a song. Now it’s back in the hands of Narni.

Narni also has secret below known as “The Underground”. Back in 1979, six young men who loved exploring caves, stumbled upon quite the discovery of an underground chapel, frescos, tunnels, and many other closed off rooms. Over the years, research (some also from Vatican documents) and preservation continued and it turns out that this hidden treasure was part of the Papal Inquisition. No one ever expects the Papal Inquisition! There are scratch marks on the walls from tools of torture. There’s a cell where prisoners left their mark, one of them is in a code that no one has been able to crack. Chilling to think of these poor people being forced to confess to heresy.

Ok, I can’t leave this wonderful city on such a dark note. Each year, from July through part of August, Narni has the Narnia Festival of music, dance, theater, exhibitions, workshops, etc. Check out their site  and here.