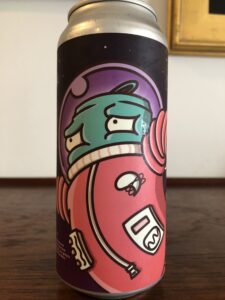 Cloudy straw color with a thick foamy head. After the foam has settled there’s tangerine, grapefruit, peach, and mmmmmm pineapple, and they say candied papaya on the label, but I’m not sure. Also a little funky armpit, but then my S.O. is an IPA drinker so that may be my point of reference. Taking a swig and it’s bitter piney, pineapples, grapefruit and a splash of some other citrus. To me this is more of a solid IPA and not a NEIPA in taste. No matter what, I know my S.O. and his IPA buddies in Cambridge would love this, so crack a can and celebrate summer! Would have also fit in well back in the day at Mugs Alehouse, and their Mystery IPA contest. Man, those were the days.

Pairs with Cheez-It’s: does not change it one iota

Non Sequitur Beer Project has been donating to a lot of great causes from New York Immigration Coalition, Planned Parenthood, to the Restaurant Workers Community Foundation and more. Check out the rest on their site and help them continue doing the good work!