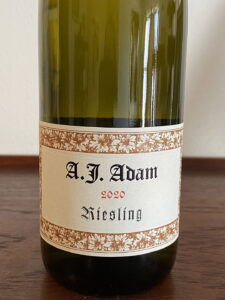 Springy pale yellow-green. Sniff and it’s a yeasty start…like a fresh baked croissant that goes all mellow or pie crust and skirts in and out, sliced pears, apple wedges, pie spice, blended mellow citrus pops, and a bit of grass. Sip and again mixed citrus tang, a little Orangina, tart apples & pears, honeysuckle, some peaches along with mango a bit of papaya, lick of slate, and a smidge of oregano. It’s just a fresh breath of life.

Pairs with Cheez-It’s: it’s ok. Brings out a lot of citrus

This is a story of the young cherishing and returning to the land of their family. Andreas and Barbara each came back when the time was right to work and devote themselves to their grandparents’ small plot. They even expanded at an insanely low price per sq. meter. At that time, people were just more interested in heading to the city, but it’s an area filled with ancient winemaking history (well, it is called “Germany’s Oldest Winemaking Centre”). The Romans left their viticulture mark and would transport wine by rowing boats on the Mosel, and there’s a really cool sculptural depiction of one of these double dragon headed vessels (date 220AD), “Neumagener Weinschiff” which was part of a tomb/gravestone of a Roman wine merchant. If you want to experience just a touch of that old Roman boating tradition and take in the beautiful view of Neumagen-Dhron, a wooden replica has been built to let you cruise in style. Don’t forget to bring the wine!