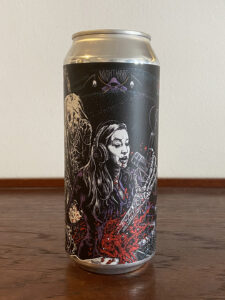 Deep dark of night thick black coffee with a small brown head that runs away as fast as possible. Chocolate charges out of the can and up your nose during the pour along with coffee, creamy peanut butter, smoky burnt brownie edges, and a wiggle of vanilla. Oh man, first sip and second and then third and damn that’s good! Seriously! It’s like someone smashed chocolate peanut butter cups with brownies coated in espresso and then the vanilla hits you. Also a lick of the honey roasted peanuts. I’m in trouble now that this is 15.5%. Big trouble!

Pairs with Cheez-It’s: NOOOOOOOOOO! I’d rather the Reaper come find me.

My last Nightmare was their “Colombian Necktie” back when they were still in search of new artists and Billy’s sketches were still being used. From this can alone, the open call really worked. Alexandros Pyromallis’s seriously intricate art rocks! Billy and his sister must have a very loving and mischievous camaraderie, for him to have her depicted doing what she loves (broadcasting on B95.5 FM  Albany from Poughkeepsie to Vermont.) and getting impaled by Death’s arm with a blood splattered garden gnome hanging out nearby. Just beautifully twisted. That being said, he did also create Matricide and Patricide brews for his parents. I guess you’ll know you’re truly and dearly loved by Billy if he dedicates beer and art to your potential demise.