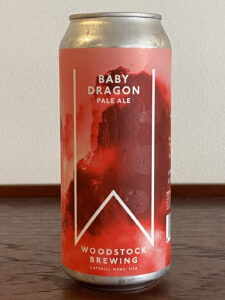 Warm golden pour with full on thick white foamy head, and lots of teeny tiny active bubbles. It’s a crisp fresh breath of air with an easy breezy mix of tangerine, grapefruit, a little lemon zest, and a pinch of pine needles that make me go “Hello Christmas!” Sipping and again it’s crisp with some welcome bitter herbiness, lemon, pineapple, and mixed citrus zest. This is one easy drinker.

So for those of you that love holiday trivia and the chance of winning a $500 tab, then you’ll want to drop by Sugarburg (the place I caught this dragon in the wild). The place looks like Christmas exploded in it and there’s 15 hidden items/scenes from your favorite movies/shows. Just grab a drink, wander through the wonderland, find those festive moments, fill out the answer sheet and cross your fingers! Happy holidays and keep your eyes out for mistletoe! 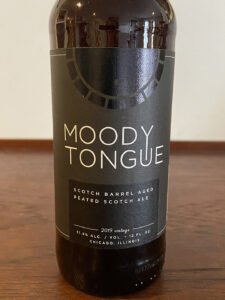 Mahogany with a small pale beige head. Pop the cap and oh yeah baby it smells like toffee, caramel, brown sugar, and warm smooth peat. This is sooo sleek! Tastes of smoky peat beautiful scotch, toffee, and something with a bitter herbiness or a little burnt cinder edge of a brown sugar cookie that balances it all out. This bottle is freaking fab and I’m glad I took the chance on it!

What do you get when you pair a brewmaster with an established culinary and brewing background with a 10 time Michelin star executive chef…well you get a Michelin 2 star brewpub. You can either go relaxed and laid back in “The Bar” or fancy it up in “The Dining Room” where you can get a tasting menu/beer pairing. Either choice you’re going to get a unique experience with their “culinary brewing” and as they say “Beer is our food”. I so want to get my hands on their “Shaved Black Truffle Pilsner”. Yeah, yeah I can hear some of you shaking your heads, but if it’s as good as their “Scotch Barrel Aged Peated Scotch Ale”, I’m all in.

Crack the can, pour and it’s a glass of dark chocolate/black coffee with a caramel head. Smells like unwrapping a chocolate bar along with a chip of baker’s chocolate, roasted coffee beans, and a little toffee. Kicking it back and there’s tastes of deep very dark chocolate and almost bittersweet baker’s, really roasted toasted black coffee (but not Charbuck’s) and burnt brownie edges. It’s a crisp yet smooth easy drinker and not overly heavy. I would love work on a pint for a while and follow up with another. Delicious!

Pairs with Cheez-It’s: NO!

It’s that time of the year again! No not that darn pumpkin spice crap. It’s stout season. Actually I ❤️ stouts 365, but then I’m a chocoholic. If I could I’d swim in a vat of it but that might end up a bit messy. A better idea would be to cue up some old Armin van Buuren and take a 4-pack of these cans for an evening dancing under the twinkling night sky.


Electric magenta with purple pops. Well, it smells just like the can reads…blueberry, chocolate, marshmallow, and milk sugar, just like a 1970’s kids cereal. Think of a mashup of Franken Berry, Count Chocula, and Boo Berry. Here we go for the taste and it again is blueberry, chocolate, marshmallow, and milk sugar but the chocolate is a Tootsie Roll that turns into a mochaccino and a little tiny lemon hint.

Pairs with Cheez-It’s: NO NO NO NO!

I do like the experimentation and the collaboration, and know a lot of you will love this sour ale (all over IG people are raving about it), and I’m going to get chastised for this, but I just wish there wasn’t any chocolate. Just one step too far for me. Yes, it’s a “wacky dessert smoothie” flair, and maybe I’m a party pooper. I think it’s the Tootsie Roll taste. They were the dreaded candy for me at Halloween. I never could understand why people would give them out, and while I’m on my soapbox, who thought boxes of raisins were a good idea too?! 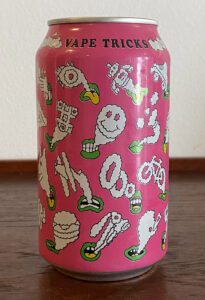 Psychedelic blur of orangey red that blends up into magenta and a super pale peppermint pink head. Right out of top of the pour pops strawberries, raspberries, cherries and cherry soda with lemon zest and vanilla cream on the end. First tingly sip and oof that is a tastebud wakeup! Tangy raspberries, tart cherries, Lemonhead candy, a touch of Sour Patch Kids, and it has a little oomph to it too. So perfectly beautiful on this hot hazy day.

Pairs with Cheez-It’s: Whoo…it goes all Warhead sour candy pucker up! I could go either way, just depends on the day.

This is my 3rd from Prairie Artisan Ales…so far I like what I see and sip. Each has been scrumptous and somewhere in them there’s also a fun trip down memory lane of childhood flavors tucked in. Halfway through the first glass an Austin Powers vibe popped into my head. “Vape Tricks” is just asking to turn on some good ol’ Strawberry Alarm Clock and get groovy with some “Incense & Peppermints”! 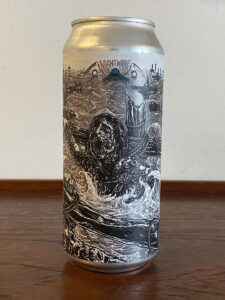 Deep hazy orange-golden with a white head that fades. Before even pouring, I can smell pineapple! After it’s in the glass that pineapple is still persistent, and then mango, and tangerine. It’s crisp and fresh and super nose friendly. Sipping that mango and pineapple along with papaya, lychee, and melon…it’s a delicious tropical fruit bowl with a shake of salt (I always put salt on fruit. Makes the flavor pop more). There’s also a little grass hanging out in the back This would be so good with pulled pork or actually pour it over the pork before you start slow cooking it. Yum!

Pairs with Cheez-It’s: GROSS! If you could only see how scrunched up my face is.

I’m a saltaholic, but I did not know the history of Moshio salt that ranges back 2,500 years. The labor intensive production had kind of been lost until a 1984 dig on Kami-kamagari isle unearthed a treasure trove of pottery, shakers, and clues to how the salt was derived from the seaweed/seawater process. There’s a modern adaptation now, but it’s still a whole lot of work. Now, to address Mizuharitsuke’s label. That’s a whole other can of worms or seawater. It’s a really truly gruesome form of crucifixion (from Japan) where you’re tied to a cross during low tide and then here comes the waves and then high tide. If lucky you pass on day one, if not…well you might be there a while to think about your transgressions. I think I’ll stay on good behavior while sipping my IPA and keeping my head above water.

Golden with green hints with lots of active bubbles and frothy foam. Apple sweetness greeting my nose, along with pineapple, lemon hints, and a teeny tiny funk after a bit. It’s a crisp, dry and delightful sip of apple, tangerine and others from the citrus bowl, lemongrassiness, and mellow lemon fizz that is not tart with malt.

This majestic beast has a gentle side that you can kick back with but enough of a roar to knock down the spiciest of dishes. Would also be awesome with shishito peppers to cool that one in ten surprise, or even better yet Carolina Reaper Ribs. I can already feel the sweat down my neck. 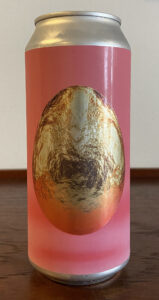 Deep hazy raspberry pour that almost goes purple with a raspberry light pink head. There’s scents of milky/creamy raspberry candy, sugary marshmallow fluff, and vanilla. Sipping tart and sweet raspberry candy with a small squish of grapefruit/tangerine, the creamy center of an Oreo, and of course some vanilla. Oooh it’s like raspberry/strawberry cobbler with vanilla ice cream on top, yeah that’s it…well minus the biscuit dough part. This berry baby has a little weight or oomph to it. I definitely can’t drink more than one or I’ll be waddling. Just slowly sip and enjoy.

Pairs with Cheez-It’s: meh, doesn’t do much…all the flavors overpower it

Now this is one happy brewery pairing! I feel like I found the golden ticket or should I say egg, and on that note a levitating one. BTW these are limited, so if you want one…go get it now! 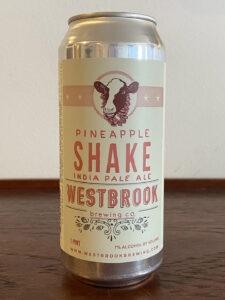