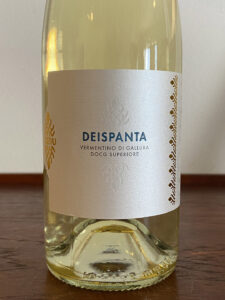 Starlight with green shimmers. Scents of pears, salt floats in, and then there are lilacs, squeeze of lemon & lime, a bundle of rosemary & thyme, and a granitey gravelly touch. Take a sip and it’s delightfully lemony & limey along with a citrus zest, kumquat-lite, slice of pear, and a little more of that granite which turns to sea breeze. Just an ever so welcome easy drinker that’s beckoning me to relax with another glass while basking in the sun.

Pairs with Cheez-It’s: eh makes it a little tart

What’s in a name or a nickname for that matter. As a child, somehow I ended up with “Chipmunk Cheeks”. Later as an adult, a friend decided to label me “Shifty” which still makes me 🤔. Anyway, Cantina Canu is a family winery that respects traditions and the generations that came before them and show it in the wine names like Deispanta. Carla’s great-great- grandfather’s nickname was Ispànta (wonderment) since he was quite the amazing fighter of a style I have never heard of before. “S’istrumpa” which means “thrown on the ground” is a traditional style of Sardinian wrestling, that’s a blend of strength and balance. The fighters face each other and start what looks like a bear hug with one arm over a shoulder and the other under an armpit, the tussle until one ends up on the ground with the other on top. Well, now I know when in Sardinia, an embrace might not always be what you expect. 🤼‍♂️