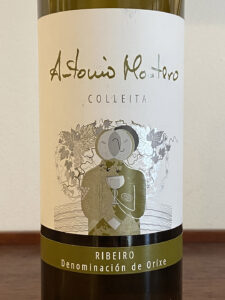 Pale yellow-green straw. Breathing in delightful pear and apple blossoms, honeysuckle, pears, mild apples, and you should see the smile on my face as I write this..there is a brief hint of pie with a smidge oregano that turns into fresh rained slate. Mmmmm…I’m betting this is going to be good! Sipping pears, again mild apple with a splash of lemon brightness, apricots, oregano, a little grass, and that good old slate is back.

This is a tale of 3 A’s…grandfather, father, and son; and each one carries the family name, Antonio Montero. Ok, so y’all are going to laugh at me, but as the name  “Antonio Montero” kept bouncing around in my head, a quote from “The Princess Bride” kept popping up (it is the 35th anniversary). “Hello. My name is Inigo Montoya. You killed my father. Prepare to die”. Yeah, I’m ridiculous but this is how my “box of squirrels” brain works, so back to the Antonios. Each generation imparted their touch. Grandfather: Antonio Montero Álvarez took the wine from “just for the family” to selling it to local bars and later outside of their own province. Father: A.M. Sobrino dubbed the winery Bodegas Antonio Montero and the indigenous varieties started winning awards. Finally the latest, Son: A.M. Pozo came on board and they made “Honor Roll of the best White Wines of Spain” and are now taking on the world. I just have one question for them, what happens if a following generation happens to be a girl…Antonia?