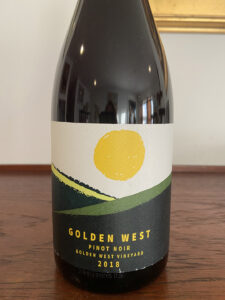 Glistening garnet glass. After uncorking there’s butter then poof gone. Followed by cherry, coriander, some leather, plums, vanilla (hmm), strawberries, and blueberries. Tasting cherries, dark plum, and raisin as I expected but then there’s a little watercress. I swear, it is there. Then some vanilla, thyme, and toasted rosemary.

Golden West is the latest of Charles West’s countless projects. This is definitely a man with a creative need to never be still. He managed rock bands touring through Europe. Fell in love with wine on those travels. Later hit the Walla Walla trail and was turned on to making wine. As time went on awards and recognitions piled up. You’ve probably seen the distinct graphics (by Rikke Korff) on his “Modernist Project” from wines like Kung Fu Girl Riesling and Boom Boom! Syrah. Golden West – The New Classic, is his new way of bringing great quality Pinot Noir to the public at a price that won’t kill your wallet. He has totally made his “The Promise” to all of us reality. Wondering what he has been doing over this past year, and what new project or conquest comes next!

Being an 80s child, you have to know what song is now stuck in my head, so passing it along to you too.