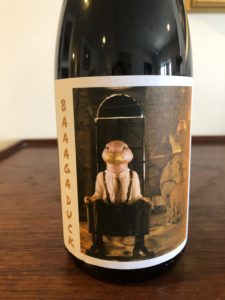 Beautiful dark ruby color. Starts off with a whiff of butter and then herbal cola (like ricola), salt, dried cherries, plum, a touch of white peppercorn, and at last wild flowers. Shall I sip or take a long swig? I will admit, this is not my first duck, and I am a big fan! Here comes the deep dark cherry, flowers, some smoke, and dried fruit and a bit of spice that I’m trying to figure out.

Pairs with Cheez-Its: Mellows it out. Rich and concentrated.

Baby this is smooth like Barry White. I feel like snuggling up in front of a fireplace with a glass and letting this wine and his voice wrap me like a warm embrace.

So who is this mysterious Duckman? Maria Pato helms this project, and she comes from quite a prestigious wine family. The vines are in her genes. Her family has been in wine since at least the 18th century. Maria, along with her father Luis Pato, (and well known Baga champion) and her sister Filipa (who I have written about previously) all focus on Bairrada’s native grapes. Maria though leaves off the region on her labels and lets the grapes to speak for themselves. Ok, this is a family I wish would adopt me. I’m more than willing to learn Portuguese, and help out with any vineyard/winery tasks needed. How amazing to have such a long heritage in wine, and to steadfastly stick with it and each other.

On to Bairrada…The Buçaco Forest, encircled by a protective wall, is an enchanting fairyland filled with lush and diverse trees, shrubs, plants and animals from the region. In the 1600s Carmelite monks, by Papal decree, sent to tend to the forest,  began introducing “exotics” including cedar from Mexico. Oh, and during that time, women were forbidden from the forest, so the monks would not be distracted (seriously?!), and not long after that a threat of excommunication was posted if anyone did harm to any of the trees. There’s paths and staircases to lead you through, and hopefully help you from getting lost in this wonderland. You can still see what is left of the convent and the Via Crucis, which are now on the grounds of the Buçaco Palace. The Convento de Santa Cruz do Buçaco also contains the famed Nossa Senhora do Leite (Our Lady of the Milk) by Josefa de Óbidos (from what I’m reading she is potentially Portugal’s first female painter and her works were very well received). Visitors leave behind wax breasts, in hope that Mary will find them some divine intervention. For a view into the architecture and the forest, here’s a calming video by Michael Levit, that I found on youtube. On to the next stop. I keep seeing posts and info that the spas in Luso are a must see. The water from the area is supposed to be some of the best in the world, and there’s a fountain in town where people can fill up their own bottles. The thermal baths were founded in the 1800s, and used for various curative reasons, but now you can find modern spas such as Termas de Luso, where you can either just relax or work on your health in a beautiful setting. One last thing, I truly wish I could experience in person, is to visit the Pato winery in Amoreira da Gândara. It is by appointment only, but they have an option for a regional lunch paired with their wines, and Bairrada’s roast suckling pig. Now that would be a perfect day.