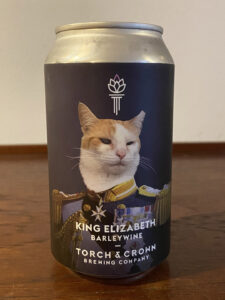 Dark brown with reddish tint and small head in light cappuccino foam. Spirited sniffs of anise, herbs, tangerine and orange, and a little Dr. Pepper. Kicking back a powerful punch of toffee, caramels, cocoa, and those southern homemade Chewies that look like brownies but no, so much better. A little bitter that is maybe even like some burnt edges of the pan that just might have stayed in the oven a minute or two too long. Also a little banana and mandarin. I am so surprised at how much I am enjoying this little can, and maybe I should have taken the recommendation at Beer Boutique and bought a second back up one.

Pairs with Cheez-It’s: Blerg! No do not pair!

When I saw this can, I thought, label alone I must have this! Figured I would mostly be writing about Elizabeth, who as they say is the emperor of their production facility in the Bronx. He has one faulty eye but who cares, I have a one-eyed kitty and have a deep soft spot for them. Then I stumbled upon the story of how Joe Correia and John Dantzler ended up in beer. These two, what little inventive trouble makers they were as kids. They as many, had fake IDs but evidently went into the wrong NYC bar and got busted. They were 16, what do you think kids at that age are going to do, wait until they’re 21? No way! They started with a home brew kit and well, let’s just say like most guys they didn’t read the full instructions, and busted again but by John’s mom due to the explosion in her kitchen. That didn’t stop them. They got better and better, and won home-brew awards (underage), so their dads got the credit. And look at them now, they made it through college in differing degrees. They didn’t kill themselves with their experiments and now they have their own business, and they make damn good beer! Oh and there’s a restaurant too, and they do take out and delivery. Check out their party packs. The Super Bowl one looks fab.