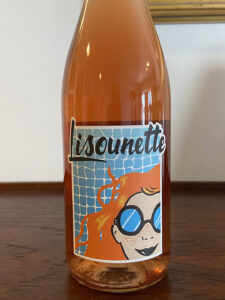 Pretty, pretty salmon color. First whiff out of the gate is buttercream, quickly followed by cherry pie, watermelon, and a smidge of funk with some interesting good depth. This ain’t your mama’s rosé. Ooh this tastes so good! Here’s that watermelon again, then a squish of lemon and also orange zest, and a salted cherry Starburst…you’ve never thought about doing that? C’mon we all do it with Snickers minis. why not? Wait, am I the only one? Back to the wine…there’s also a pull off the end of a croissant with a dab of clotted cream. Delicious!

Pairs with Cheez-It’s: oof so tart. Just put them away

So I’ve learned a new word that I never would have thought of hearing: “Hurluberlu” which from what I’m finding is “one who looks at the stars and planets to show him how to grow” and in some cases just an “eccentric man”. Hmmmm, well evidently this is part of Sébastien’s magic. He not only looks back to the past generations (he’s 15th) for guidance and techniques but also to the future with going biodynamic and permaculture. Another part of the future or branching out is when he took his first steps toward a rosé in “Lisounette”.  Well, as you can read above, the 2020 rocks! If it’s due to following celestial bodies, then I say lets all break out our telescopes and go moon bathing!