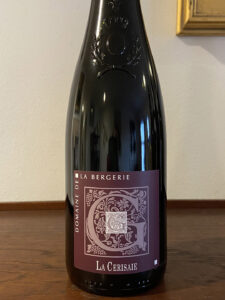 Deep dark goth cherry velvet with a purple shimmer. Swirl and here comes scents of dried and fresh cherry, plums, fresh green bell pepper, olive pit, a bouquet garni of thyme & rosemary, and lilacs as it opens and later expands to a big bouquet of flowers. Nice juicy sipping here of plums, cherries, and here comes that bouquet garni again with coriander added in, a little oil cured black olives, and then here come running some elegant roses and lavender.

Pairs with Cheez-It’s: juicy and smooth

Domaine de la Bergerie was purchased in 1961, through an auction known as vente à la bougie, which ok call me ignorant, but I had never heard of that before. Actually it’s a very cool, fair and civilized way of bidding (dating back to the 15th century) timed by the burning of candles. Each are around 30 seconds and the holders/candelabras are pretty cool. When the last candle is out, the auction is over. How exciting that moment must of been when Marie realized the property was now hers! The domaine has continued to be a family driven venture, and they’re in the 8th generation with daughters Anne and Marie. They’ve also brought a chef into the fold too (Anne’s husband David). So when you visit, you can also dine in his Michelin star restaurant, La Table de la Bergerie.