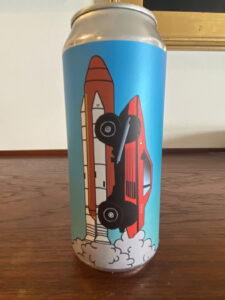 Dense dark chocolate color with a small coffee head. Whoa this is total dark chocolate tickling my nose, along with espresso, vanilla, lots of raspberries and nutty. Drinking in tingly chocolate covered raspberries, brownies, sweet and mellow vanilla, espresso that snaps back, and that rich nuttiness of Marcona almonds. Lord, how I love Marconas. I had to cut back on them at one point. It was totally becoming an addiction.

Pairs with Cheez-It’s: oddly it makes it super sweet. If you want, try them together, but I prefer the Imperial Stout on its own

So excited when I found this Hoof Hearted collaboration and giddily brought it home. They have so much fun with their irreverent ever changing label art. I think “Don’t Microwave It Don’t Boil It” is my favorite. Love their sense of humor! Heck, the brewery’s name came from a fart joke. They also have such a dedicated following (especially for their IPAs) and there’s good reason for that too…it’s damn good beer! As for how Hoof and Dugges decided to collaborate, I’m not sure of that tale, but would love to hear how this power team came about. Funny enough, the Dugges Bryggeri story page starts out with what sounds like the beginning of an old joke, “An Englishman walks into a bar.” So like Hoof, I’m seeing the humor and also that they also have quite a following in Sweden to the point of their having to expand in 2009, and from what it sounds like on their page they may need to do it again. And I’ll leave it with their own motto, “Brewing our beer. Preaching our brews. Living the dream. And, loving every minute of it!”