Bright shiny cherry glass. Beautiful light spring flowers floating, along with cherries, fresh picked strawberries and their leaves, raspberries, and earth. Such a smooooth taste, cherries, strawberries, blueberries, raspberries…digging in the dirt and being rewarded with your harvest. There’s also rosemary, salt, and a lush, vibrant, light and a beautiful end as all the flavors keep coming and going. This is no cheap isle, you’ve been rewarded your own luxurious paradise.

I truly think Sanchez-Mateos has the best job in the world. Owning Galgo Wines gives him the chance to meet with interesting people from small producers, other distributors, local (and not so local) enthusiasts, writers, etc (who doesn’t love conversation with kindred spirits) and utilize his financial background education into the mix..he also gets to travel far and near and pair up in the cellar with people like Daniel Ramos. Daniel, has a passion for Garnacha (and so do I!) in particular from Sierra de Gredos district near Avila where he has 15 hectares (saved and resurrected) to farm in several parcels (“parcela wines”) which are harvested and processed separately. There’s also 8 Jaen hectares, and it’s a nice fresh blend with the Garnacha. Am really looking forward their 100% Jaen Blanca, to see how the grape shines on it’s own. Side note, Daniel shares a cellar with Fabio Bartolomei of Vinos Ambiz, and if you’ve read any of my previous posts, you will know how crazy I am of his La Gatta Mormigliana 2016. So exciting to discover these two are minimal intervention cellar roomies, and wonder the secrets they share. 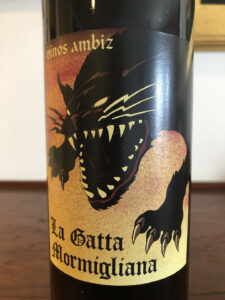 This is the deepest dark goth purple which fits the label. Starts out with dark funk and grass scents. Very quickly that all turns into deep cherry, dark plum, oddly coriander that become cloves, and then licorice. This wine keeps evolving like crazy. First sip is deep sweet cherry, raisin, prune and plum. Something toasty emerges. There’s a touch of bitter bit at end, like pecan hulls that get left in after you shell them and think it’s all just meat. Here it goes changing again and it’s all fruit. I had been cautioned about this wine because I was told it might be too funky for me. Nope! It has funk but not to the extent I been told. In the end it is smooth and romantic. Not what you would expect from a giant monster cat nightmare.

Pairs with Cheez-It’s: super sweet fruit with just a hint of the funk

Fabio Bartolomei is the outsider artist of wine. He has no training in winemaking, and during his start he worked out of garages, stables, etc. If La Gatta Mormigliana is any example of the rest of his wines, he’s freaking brilliant. The name comes from a story his father recounted to him of a fearsome cat with iron teeth and steel whiskers, that would say “Chi vien giù lo mangio” (If you come in, I’ll eat you…). If anyone knows where to find more on this tale, please do reach out to me. Sounds like a good scare. Fabio is also very adamant about making natural and organic wine, but bucks the certification. Here it is in his own words, “I refuse to certify because I believe that the polluters should pay for the damage they are doing to the environment, not the clean farmers”. Because of this, the bottle has a back label with a lengthy list of what it doesn’t contain, what processes it went through and what he didn’t do to it.

Would also like to give credit to the two label artists: Francesco de Aguilar and José Perico. That is one scary cat!