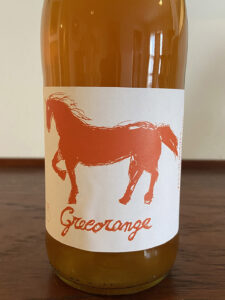 Electric orange…very orange…like Cheez-It orange. Breezing in are orange blossoms, magnolias come out after a bit and fade back, oranges and a twinge of lime. First swig and tastes are of lemon/lime/mandarin zest and a citrus squeezed mix. Give it a little time and then there’s something mineral, and a touch of real saffron threads (not that fake stuff that’s metallic). Just dry enough, fresh and light, and a glass of sunshine.

Pairs with Cheez-It’s: pairs up fab, but I prefer the wine solo

It’s pretty obvious how much I love wine, but it’s also the tales, the history, and what drew people to work the vines. Reading about Danilo Marcucci on SelectioNaturel’s site and they write he’s the first to say this is his wife’s land and “he is merely a guest, married to the vines and his wife Alessandra’s noble lineage” (dating back to the Middle Ages w an arranged marriage in the 1700s sealing the families’ deal). He just rebooted everything, and was lucky that  chemicals were never used on the land, since he’s been called “Italy’s Lord of Natural Wine”. He learned from old school masters after being introduced to a glass of nature, and his philosophy is “No chemistry in the vineyard, no technology in the cellar.” Can’t get better than that.