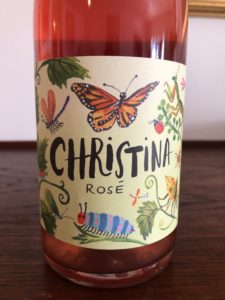 A glass of really deep flaming cloudy rosé. Sniff and there’s cherry, watermelon, sea breeze, citrus peel, and mineral. Just a beautiful refreshing fragrance. Tip your glass and take a sip. Whoa it’s super fruity. Again there’s delicious watermelon, tart cherry, some lemon tang, and I do believe pepper. Oh this is so easy to drink, but take your time, unless you have a backup bottle in the fridge.

The Netzl family has six generations of wine history, and Christina has taken it to the natural side. She grew up on her parents farm/vineyard (in Carnuntum, Austria) learning the ways of the vine. As her family began further focusing on the wine, she also continued her education in London. Upon her return home, she navigated the winery to it’s now organic status, which is heralded on the labels of her Christina line. I’m a big bee and bug backer, and these cheerful illustrations of the beneficial inhabitants of the vineyard tell it all. There’s no pesticides here. Also interestingly enough, Fritz Zweigelt, who had doctorate in entomology, is the father of the grape Zweigelt. Back in the 1920s he crossed Blaufränkisch and St. Laurent grapes to come up with this hybrid.

On to Carnuntum…what a history, an ancient Roman fortress and a destination on the Amber Road. Now from what I’m reading, it’s a treasure trove for archeologists, and as seen in Christina’s wine, an amazing place to have a vineyard from the rich soil influenced by the Danube. Visiting the city’s website, introduced me to Heidentor or also known as “Heathen’s Gate” which is quite weathered yet still majestic. Their site also has a digital rendering of how it probably looked when it was first constructed back in 351–361 AD. There’s also remains of amphitheaters and a gladiator school which they also recreate here. Alright, while watching the video and listening to the dramatic music, it made me have a GOT moment. Started waiting to see if a dragon would fly in and crisp everyone.

Turning away from the city and now heading to Donau-auen National Park, which is a floodplain area along the Danube. I thought, I was just going to be enjoying discovering the wildlife and land, but as I research, I’ve discovered a political movement that saved and created this area. As industry developed and hydroelectric plants and dams popped up along the Danube, Austrian environmentalists stood up and made their voices herd. They protested and encamped themselves to stop the destruction of nature. The police could not even move them. Thousands occupied the Hainburg area to stop the deforestation which became known as the Hainburg Movement. This led to their Supreme Court stopping the clearing of the land and eventually the power plant losing their fight. Thank goodness! Think of how different this area would be, if people just sat back and let their precious water, wildlife and forests be destroyed. Here’s a gorgeous video provided by the park. Wow, to wake up and see such lush beauty each morning would be amazing. This is definitely a place that was and is worth fighting for.