Deep purple tapestry with a ruby rim. Holding the glass up and a puff of buttery caramel that floats out and then morphs into cherries, biscotti, raisins, cola, forest fronds, and a little of the green fairy. Alcohol alert…you have been warned because it will go into hiding as a spicy dried fruit but this is 14.1%, yet it’s soooo smooth. First splash on my tongue and there’s plums, cherry and dried cherries jammy, raisins, hay (that fades), sage/thyme bouquet garni, smoke, and after a bit more breathing time it is so smooth once again. BTW this wine will make you tipsy before you know it, so beware of wine goggles. You might fall in love with more than this wine, and sometimes…well you know, it can spell trouble, oh and don’t go shopping online while drinking…you might end up with a pair of 1976 roller skates…trust me.

Pairs with Cheez-It’s: FAB! Love them

My 1st Malaparte wine was their Dindi Blanco which I loved and this one brings on that same feeling but is such a different deep lush creature. The taste and smell of their natural land and all that grows and nourishes their vines just shine in their wines. I love this quote from their site, “When you walk through the vineyard, in a second, you bring clothes caught on forever perfume of adventure. The scent of thyme, lavender, rosemary, odor open field, later, hunting and feathers. And how many of those scents we are in the wine after a spring and summer of coexistence with pines, lavenders, sage, thyme, rock roses and evergreens.” Ah, it’s a celebration of Tempranillo and their part of Segovia in a beautiful bottle. 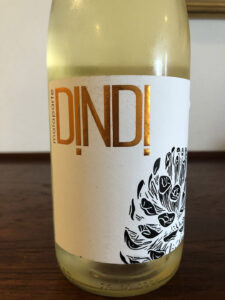 Color pale golden yellow. Looks refreshing! Smelling a blend of citrus, melon, some vanilla sweetness, then salty smoky, and something greenish like grass. Sipping cantaloupe and honeydew, a twinge of apple, tangy orange, and lemon tart (with a not so sweet yet toasty vanilla savory crust just lingering in the back). As it opens more, it’s sultry but still has a mineral granite lick. Medium body with an acidic finish. In other words, the best of both worlds

Reading up on how Malaparte Vinos, grew from a dream of Mariano de Frutos. Back in 1996, (wow when I typed this, I was thinking that’s not that long ago, but in reality, yes it is…time flies.) he started planting only Tempranillo in a small 3.5 hectare vineyard, but over the years it has branched out to a variety of grapes such as mentioned above in the wine notes. Very glad his dream has been realized and shared with his daughter Elisa de Frutos and her husband Ruben Salamanca.

Mariano’s dream started and is still in Cuéllar, so off we go to check out the town. If you happen to arrive the last Sunday of August, better keep watch of what’s happening around you. Early each morning (the Festival of Nuestra Señora del Rosario lasts 5 days) the bulls are released to do the infamous run through the streets. I think I’ll stick to just visiting the Dukes of Alburquerque castle. Awe inspiring gothic and renaissance architecture are blended in this incredible structure. Quite a fortress, that became abandoned after the dukes left the neighborhood. Much later in 1938, it became used as a prison and later a sanatorium for TB infected prisoners. What a change from being an exalted lap of luxury. As of now though, it has become a vocational school. Can you imagine going to school in a castle! Oh wait, that makes me think of Hogswart. That could be magical.

Let’s check out one more place in the nearby town of Iscar, the Museo Mariemma. Guillermina Teodosia Martínez Cabrejas, otherwise known as Mariemma, was one of Spain’s most important and influential dancers and choreographers. Born in Iscar, but due to her father wanting to make a better future for his family, they packed up and moved to Paris. From what I’m discovering about her past, she often danced in the street and was discovered for her talent at the age of 9, and then sent to study with a professional. By the age of 12, she was already performing as a soloist at the Olympia Theater. She passed on her love of dance, knowledge and creativity by teaching at Real Conservatorio de Arte Dramático y Danza de Madrid, and forming her own school: Mariemma Ballet de España. If you want to learn more about Mariemma, check out Daniel G. Cabrero’s documentary, “My Paths Through Dance”. Now I have another museum to check off my visit list whenever I get to travel again.