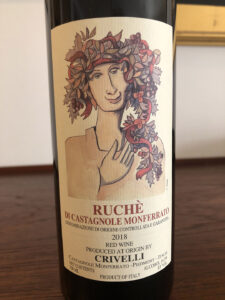 Shining ruby and purple. It’s buttery at first…just a little bit. Next it’s fragrant warm spice, deep cherries, plumminess, and a touch of Twizzler. Sipping in spiced cherry, plum, prune and other dried fruit richness, and some cola. There’s also twinge of bitter like an olive pit or maybe an almond and some black pepper. Medium body and lovely and easy to drink.

According to Azienda Agricola Crivelli, ”If someone in Castagnole Monferrato offers to you a Ruchè, it’s because he cares of you”. Now, that makes me feel pretty special to have a bottle of this grape with mysterious origins. In the past there were tales that monks may have brought it from Burgundy, but that got a big fat no with a DNA test. It appears to be an indigenous grape that has been around at least from the Middle Ages, and was revitalized by a local priest, who has been said to have wished he had more time to spend with the vines than people.