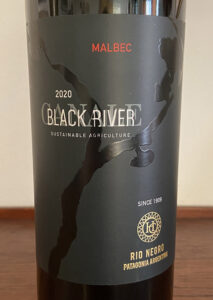 Maroon with bluish purply hints. Scents immediately flow out of dried cherries, plums, raspberries, tiny bit of woodsy nature, and a familiar scent from home of apple blossoms floating on a spring breeze. Sipping and again cherries (dried and fresh), plums, raspberries with an addition of a touch of Nilla Wafers. It’s lively and as it grows there’s a tingle in the back that mellows and that woodsy nature flair is there again.

Pairs with Cheez-It’s: blerg…but it would be fabulous at a good ol’ backyard bbq with some steaks on the grill

This is a winery born from a biscuit…ok it’s more than just that. José Canale, originally from Italy ventured to Argentina, met his wife Blanca Vaccaro, had a small brood, opened the family bakery that expanded and grew, and then here’s the bad news. At 44, José passed but Blanca with strength and determination forged forward in the business to care for herself and her children. Out of the brood Humberto Canale became a civil engineer and later a government official, while the others kept growing and industrializing the family cookie business (which was quite a success). Even though they walked different paths, they were still together. Humberto saw potential in the Rio Negro area and invested in a fruit and wine venture that led to where the family and the winery is today and is in the hands of Guillermo Barzi (Humberto’s nephew) and the future generations. BTW there is a heck of a lot more to this tale but no way to fit it in an IG post. Just enjoy a glass and you’ll be drinking their history and it’s all you need. 🍷