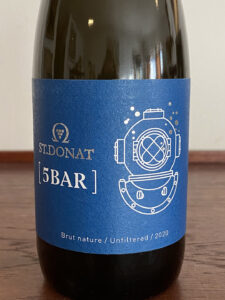 Pale yellow gold with tiny bubbles tracing fictional maps on the surface. From the moment the cap is popped there’s scents of white donut peaches, yellow plum, fresh citrus spritz, a smidge of a real croissant not made in this continent, shake of salt, a little grass (the fresh cut kind). Sip and it’s crisp. There’s citrus pop of lemon/lime mix, and touch of the white donut peach that turns into apples and pears. It’s fresh and exuberant tongue tingling goodness with a touch of yeast. It’s just darn exciting, and I want this for my next birthday, but I think we’ll need a few more since it’s 375ml.

So what’s the deal the antique diving helmet on the label? Yeah, I know absolutely nothing about diving, since I am terrified of being eaten by a shark. An ex-aunt (I’m so glad she is an EX) put the whole shark idea in my mind at a very young age, and I’ve spent years trying to get past it. Anyway, back to the bubbly. So happy that the winery/Tamás has a site & blog that answer it all (well, with auto google translate). It’s named 5BAR since it’s fermented to that pressure, “which is just like swimming in the sea 50 meters deep” (my brain immediately thinks 🦈). “I see this as a good balance point, less pressure, less sweeping, lots of fruit left and no foaming so much.” Also explains the small size too, “Half a bottle is often enough for two people.” Well, I’m not so sure about that because, in my world if there’s two of us, “we’re going to need a bigger boat bottle”.