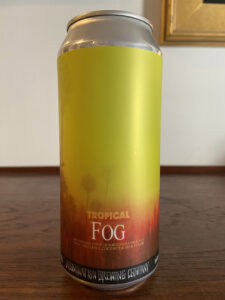 Hazy golden orange murky tropical punch with a active white head, The scents full on hit you as soon as you pop the can. It’s a super cool tropical punch just like the can says…pineapple, coconut, creamy, and a bit hoppy. First sip and damn that is active and is really something. As before there’s pineapples, coconuts, punchy and mellow at same time. Also tangerine, singed orange peels, and a little bitter herby hoppity hop. This should be served out of a coconut with a little umbrella, and don’t forget your sunhat and shades.

Pairs with Cheez-It’s: Pulls forward the coconut and makes it more bitter, so I have to give it a thumbs down and don’t pair.

So Abomination Brewing, is a nomadic brewery and they love hooking up with like minds and working across the beer community. During our pandemic world, they had to come up with a way to create a social distance collaboration brew with a DDH DIPA, and have a slew of breweries that are joining them and putting their own spin on it too. So check out these on IG: @saintsrowbrewing @KinsmenBrewing @hoofheartedbrewing @henorthbrewery @breakerbrewing @rotundabrewingcompany @evergrainbeer @pilgerruhbrewing @ten7brewingco @frontporchbrewing @tatteredflagbrewery @icarusbrewing @bolerosnort @lost_tavern_brewing I think this is a great way to bring people together even though we are still so far apart. So crack a can and raise a glass to Abomination, their creativity, and their beautiful beers.