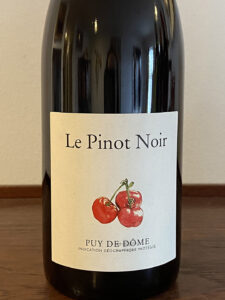 Maroon you remember the crayon…not the band. Ah scents of delicious cherries, plums, blueberries, a touch of earth. a little cola that goes great with a little warn croissant. Sipping cherry funk, plums, blackberries, blueberries, and pinch of pepper. It’s light with a nice touch of earthy/natural touch of darkness with all sorts of dried fruits from cherries to figs.

Pairs with Cheez-It’s: gives it a more rich zing

This Pinot Noir comes with a nickname of “Les Cerises” or the cherries that are represented inside and outside the bottle. This lovely grape is fed well from the volcanic soil of Auvergne, which has a loooong history of wine and in modern day a determined co-op that worked really hard to achieve Cotes d’Auvergne AOC recognition  in 2011. There’s just something about this wine that makes me think about my favorite writer, Martin Walker, and his “Bruno Chief of Police” series. Specifically it makes me think of when his fictional town of St. Denis (in Dordogne) has their outdoor festivals. Whether it’s from “The Dark Vineyard” where townsfolk come together to harvest grapes ending in a bbq under the stars, or one of their outdoor music fêtes sipping a glass while listening to the featured chanteuse of the night. Pure enchantment. 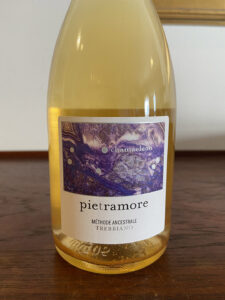 Light straw yellow with seriously active bubbles and some sediment, and the final pour is dark gold orange with crystal sediment. After popping the cap off, wow! Hadn’t even poured it yet. There’s exotic flowers, a whiff of hay/yeast that comes and goes but this is the first glass and later it has drifted away. Next comes pears, honey, lemon zest, salt, and something herby like a pinch of some oregano and rosemary and oddly a hint of cinnamon. Sipping and exciting tingling on my tongue. Those bubbles keep rocking. Again pears, golden apples, Valencia oranges, a good squeeze of lemon, light honey, salt, and a faint Italian herbal shaker mix. There’s also dryness and at end a bit of ginger. Whoof that’s a whole lot, but is such a delicious song when you drink and don’t dissect, it’s just amazing. I really enjoyed Vanita but this is a whole different beast.

Pairs with Cheez-It’s: Bring’s on the zest!

Pietramore’s wines have the most beautiful bottles, with a different stone and constellation on each bottle. Andrea Castelletti (art and creative director) took the name of the winery: Pietra – stone and amore – love; then brought in their biodynamic aspects of cultivation and winemaking which I’ve mentioned before, including the pass of the moon, the connection of the earth and sky,…. and is also represented through these ancient constellations. Many constellations have a mythic tale, but Chamaeleon was designated by Dutch navigators who often chose exotic creatures to help them traverse the seas at night. This little lizard combined by the slice of stone on the label holds a little secret too…it glows in the dark! Leave the bottle out in the light for a while, then find the darkest spot in your home, and you’ll get to enjoy this little surprise too.

Sparkling golden glass with tiny bubbles. Inhaling creamy vanilla, orange peel and tangerine but super light. There’s some natural funk, but I just opened this and it rapidly fades away. It’s clean, dry and a little nutty. Sipping apple that has a slight cider feel, also a citrus combo, then it goes all mellow, creamy and some toastiness with vanilla. This is crisp and regal and is making my day!

Pairs with Cheez-It’s: brings out the toast

The happy little birds on the bottle give this lovely sparkler its name “Cui Cui”, and from what I’m finding is the way they chirp in France. As for the contents of this bottle, Laurence Nartz is the fine winemaker responsible for this delightful bubbly. Her parents Gaby and Michel Nartz founded the winery, but have now left the winemaking part to her. They’re focused more on the vineyards and their 17th century home/bed and breakfast which is also listed as a historic monument. Oh would be so lovely to go for a tasting and stay for the evening learning more about their wines, land and the old town Dambach-la-Ville and their medieval walls. 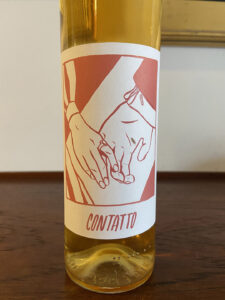 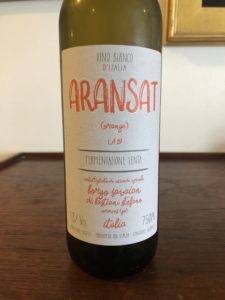 Color is gold like a bar from Fort Knox. Let it breathe a little before the whiff. There’s dark tangerine or grapefruit peels (that have been flamed), orange blossoms, and wet concrete after a cleansing rain, and wait…a hint of pine needles. Swish and swirl and take the first sip. Again there’s orange blossoms and now flamed orange peel. It’s heady, and then takes my memories back to an orange jolly candy from my childhood. I think there’s also a bit of kumquat, definitely salt, and some granite. This is a beautiful clean wine. Oh and the more you know: Aransat is Friuli slang for orange.

Pairs with Cheez-It’s: makes it oh so sweet gold. Brings out the orange oil. Burn that peel!