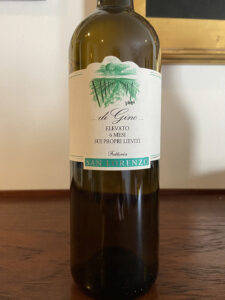 Put a ring on it golden with an orange tinge. Crisp pops of tangerine, a little salt, pears, and dried apricots; all on the tip of my nose. It tastes a lot like it smells with the pear, citrus and smokey salt with addition of crisp apples; and as it warms up peaches and honey. Oh this is so lovely. It’s like when you get a new book from your favorite author (mine is Martin Walker), and as you turn the pages and get further in it just keeps getting better and better.

Pairs with Cheez-It’s: makes all the flavors more bold

Natalino Crognaletti has a wonderful way of choosing names for his wines. “…di Gino…” is named in honor of his father who passed down the farm/winery to him. Others are for a dog, hares, the sun, and what I thought was maybe another word than “gattina” for kitten due to the image on the bottle, but as I searched, I discovered “La Gattara” pretty much means “cat lady”. Ah, “cat lady” a moniker I know well. Maybe this should be the next one I try. I digress. Back to “…di Gino…” which is made from the local Verdicchio clones that Gino selected for the vineyard after it was handed down to him from his father Enrico. This beautiful land is in the province of Ancona which is known for their towns of medieval fortresses. The town Montecarotto is one of these romantic medieval towns but it also has other more modern cultural interests. Their MAM Museo d’arte Moderna e Mail Art appears to be the only public mail art museum in Italy. A recent exhibition called “Le Disobbedienti” which is a tribute to Artemisia Gentileschi, Frida Kahlo, Charlotte Salomon, Berthe Morisot, Suzanne Valadon and Elisabeth Vigèe Le Brun; that included work from 150 artists from all over the world. Would have loved to have seen it in person.