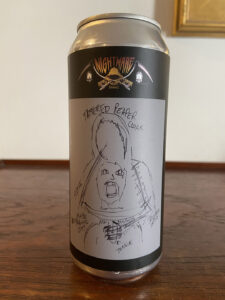 Very deep orange/deep gold with a small head, dancing bubbles, and some light sediment has settled the bottom. Scents of exotic mangoes, pineapple, and limes. This is a beautiful tropical drink! Transports me to a warm island, and would be wonderful with fish grilled on the beach under the stars. Glassful of mangoes, lime, strawberries, pineapples, rhubarb, kiwis and the bubbles make it so elegant. What a crazy description for a Gose named, “Colombian Necktie”. Although, after doing a little poking around, I did find this beer is influenced by Champús that has ties to funeral rituals in South America, which would explain the “necktie”. It was/is a form of tortuous death used to send a message and sometimes would be done post mortem, and appears to have started in Colombia during their La Violencia, civil war (1948–1958). Well…death may be the inspiration, but this goes is full of life.

Pairs with Cheez-It’s: brings out the lime

2019 was a smashing year for Nightmare Brewing (Farmingdale, NY). They were named Best New Brewer in NY, Best New Brewer in US, and 2nd Best New Brewer Worldwide, and they keep cranking out the hits. All inspired by horrific history, mythology, torture, and of course death. What else would you expect though from Death Metal brews…cute puppies and unicorns? Oh, definitely not, just check out their labels (collaborations with metal artists) that leap off the shelf at you. This can has a concept sketch by Billy Powell after a break with his original artist this past summer, and is the last label that he calls, “sketched like a toddler”, because he’s found wonderful new artists after a post on IG. Bravo for the move, Mr. Powell!