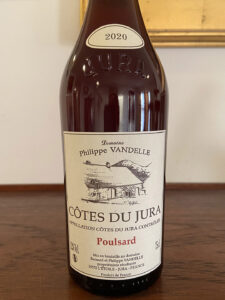 Glimmering strawberry cocktail (a little chilled). Those same strawberries are waving hello to my nose along with raspberries, a little blueberries, cherries, and let it open and there’s a pinch of spice with some forest goodness. All those berries are there again but this time they’ve brought cranberries with them, a smidge of citrus zest, and a puff of salty smoke that fades only to gently return. Even with all the fruit, It’s so light, refreshing, crisp and clean.

2nd Vandelle and again you can taste where it’s born, and thank goodness this poulsard has it’s chance in the sun and not blended away. Feels like that spark of first falling in love. It’s kind of like when you meet that special person and it’s all new. There’s romance, spice and all the surprises are nice. Y’all know Valentine’s Day is soon upon us, and I can vouch this bottle would be better than that yearly bon bons default. 🍬

Beautiful shimmering shining straw gold. Inhale and there’s apple, heady flowers like honeysuckle and lily, then melon, and a little smoke. Going in for the sip and there’s fresh apple, melon, again that lovely honeysuckle, a splash of lemon zest, and a lick of salt.

Pairs with Cheez-its: brings out more zest but consistently and gloriously delicious.

Sitting here with my glass and reading about Philippe Vandelle and how he ended up in wine. In his case it’s ingrained in his DNA. Six generations of pure love of the land (l’Étoile) in this family. Passing down grape knowledge such as training, harvesting, the sous voile, and in the case of this particular wine, ouillage. Philippe Vandelle also achieved sustainable agriculture designation by Qualité France SA, which is a lot of hard work. An added treat on their website is a selection of recipes that I bet will pair well with their wines

Let’s start off in l’Etoile, which is said to be named after star shaped fossils (of ancient starfish) that can be found in their limestone-rich land. Oh they are just so beautiful! Way back in the Jurassic Period, this lovely land was covered by the sea. Who knows what other creatures swam above this land.

Off to other parts of Jura…from childhood I have always been fascinated with caves and their inhabitants over the ages, so starting off this travel with the Grotte d’Osselle. They do start in Doubs but continue through Jura. Discovered in the 13th century and people began touring them in the 16th. I wonder what spelunking would be like way back then. Think about the fashion of the times, your feet would probably be killing you. Back to the cave and an early dweller. An ancient bear skeleton was discovered back in 1856, and as the years went on and more were found, it became known as a bear burial place. The stalactites and stalagmites are incredible, and give the caverns a religious moving feeling. Check out the pics on the official site.  Don’t let the bears scare you.

Next dream stop is La Cascade des Tufs. This waterfall looks like something out of a fantasy flick…like you could turn around and find a fairy or Gelfling sideline up behind you. Please take a look at this video, and you will totally get what I’m talking about. The fall is fed by the underground Dard river that flows through the Baume-les-Messieurs cave.

Now for something that’s family friendly fun, in Lons-le-Saunier (Jura’s capital) there’s a special museum for something near and dear to a lot of kids’ hearts, La Maison de la Vache Qui Rit. Yes, there is a museum dedicated to the beloved Laughing Cow. Yep, it’s all about that little cheese and the design/packaging throughout the years. Moooooo!