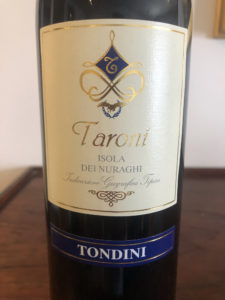 Holding up my glass next to the window, and the color is deep shining ruby. Swirl and sniff…pine and cedar syrup, then smoke, cherries, prunes, cola, and old book leather. You all still remember books, right? Reading digital books just doesn’t have the joy of holding a real physical book that has a gentle on the eyes font. Now for the taste, and there’s cherries, blueberries, plummy, spice and some smoke. This is soooo smooth, and deep dark richness. As much as I hate using this term, but I can’t think of anything better, this is one sexy wine.

Pairs with Cheez-It’s: This is deep velvet underground. 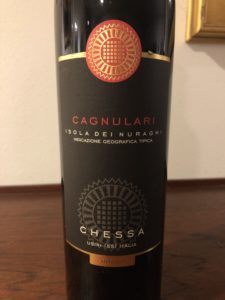 I used to work at a record store for many, many years in high school and college, and thinking back must have sold thousands of “Machine Head”.

Take a giant breath while jamming out and here comes the chocolate, smoke, salt, cigar, and a touch of cherry. You have to hunt for the cherry, but when you find it, it’s a chocolate covered cherry with a side of cola. Lift your glass and sip in the deep dark cherry and plum, smoke and salt, granite, dried figs, and cola. Deep dark earth finish. This is the happy goth of wine. Luscious

Pairs with Cheez-Its: makes it more juicy and fruity

This wine is unbelievably delicious and I had a hard time restraining myself from finishing the whole bottle. For years I’ve wanted to go to Sardegna but each year I said next year. Why on earth did I put this off?

Cantine Chessa according to their site (which is a darn beautiful site) have been wine growers for over 60 years. The winery is owned by Giovanna Chessa, and she has continued the tradition of using local Sardinian grapes: Vermentino, Cagnulari and Moscato di Usini. I’m not one to choose a wine based on awards, but honestly all of Chessa’s wines have garnered a lot of acclaim. Cagnulari in particular has quite a catalog of awards over the years, and the 2016 I have received a Decanter Bronze. Cagnulari sounds like a gem of the Using area and a true survivor that was brought back to it’s now elevated level, or as on Chessa’s site, they call it “The King of Usini Grapes”.

Usini (and the province of Sassari) seems to be quite a land of celebration. I’m finding festivals for wine, saints, Carnevale, folklore; and the one I’m most intrigued about it for their famous pasta Andarinos, In the summer, they kick up their heels for this pasta, which is only made (and also only handmade) in Usini. There’s a lengthy history to this pasta that traces all the way back to the 17th Century. Maybe during this lockdown, I’ll try to teach myself how to make it. In December, there’s also the Faradda Dei Carruzzi. Participants (or Charioteers) zoom down Viale Trento in makeshift creations built of all sorts of junk. As long as it has wheels and you can ride it, then anything goes.

What intrigued me the most from Usini and Sassari are the nuraghi. From what I’ve been reading, there are tales that these were graves for giants that once roamed the land, but in actuality, archeologists believe they are sites for multiple burials, and are from the Bronze Age. Their are nuraghi’s all over Sardinina and are recognized by Unesco as world heritage sites since 1997. The structures are built from stone and the one I’m most intrigued with is the Tombs of the Giants Li Lolghi. Along with the interior graves there is an outer area that most likely was used for rituals. Honestly I wish I knew more about these structures. Others are mentioned as fortresses for the Nuragic civilization. Click here for wonderful photos of the Giants Tomb. It’s a fabulous site about everything you could want to know about Sardegna by travel writer, Jennifer Avventura. I don’t know if she will see this, but I want to thank her for her wonderful work. I’ve never met her, but stumbled upon the site, and she makes me want to whisk away to Sardegna and investigate every thing.