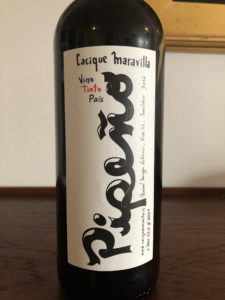 First thing you should do with this red, is slightly chill it. Yes, you heard me, cool it a little. Pour and there’s a deep dark ruby that you can’t see through. First sniff and I’ll let this breathe a little more, so I’ll play with the cats while I wait. Earthiness lingers and opens to plums, blueberries, cherries, and some little salt/mineral. Here goes the first sip, and it’s tart, cherry, and out comes some orange, and wait for it…dark plums appear. It’s lush, delicious, and then there’s a hint of cinnamon, a little pepper, and I do believe a little smoke. I’m in love, and there’s more to love with this bottle. It’s a whole liter.

Cacique Maravilla, located in Yumbel, Chile, is helmed by Manuel Moraga Gutiérrez and his amazing mustache. Seriously, it’s a work of art. Back to the winery, from what I find online, the Gutiérrez family has had long ties to Yumbel which stretches back seven generations when Francisco Gutiérrez decided to settled down. Also his nickname is the winery’s namesake, which means Magnificent Chief. The vineyard is dry farmed, and is gifted with rich trumao/volcanic ash soil. There is no intervention and minimal pruning. As for the winemaking, it’s all natural too. It’s made with natural yeasts from the grapes and no filtration. What a beautiful and wild land. There’s a wonderful gallery on their website showing snapshots of the vineyard. There’s sheep wandering in the vines, glistening bunches of grapes and then them being crushed, and what looks like a delicious celebratory barbecue. Oh this is making me hungry, and wishing I had another liter for today.

On to the Bio Bio region…outside of Los Ángeles is the Laguna del Laja National Park where you can find the Antuco Volcano and Laguna del Laja. From what I’m reading the Laguna is a beautiful emerald green and has debris from past eruptions throughout the shoreline. Evidently, you can also go salmon fishing here. The park is also great for birding. Some of the multitude of feathered friends include Bandurria, Condors, and the Rufous-bellied seedsnipe. Other wildlife include pumas, foxes, and my personal favorite the Vizcacha.  The snow capped volcano looming in the background is technically still active but no major eruptions for eons. Back in April 2013, a pilot logged that he saw ash emissions, but after further investigation the VAAC attributed it to a wildfire.

Next we stop off in Concepción to visit the Casa del Arte José Clemente Orozco, located at the University of Concepción. My particular interest is in the mural by Jorge González Camarena. In 1960, Chile had the massive and devestating Valdivia earthquake which was on a scale of 9.4 to 9.6. Mexico reached out to assist the Chilean government on rebuilding (which included rebuilding Casa del Arte) and this is how the Mexican artist, González Camarena, became inspired to become involved. From 1964-1965, he worked on the mural “La Presencia de América Latina” which depicts the history of Latin America with all it’s triumphs, trials, beauty and at times death. Above the mural is a quote by Pablo Neruda, “Y no hay belleza como esta belleza de América extendida en sus infiernos / en sus cerros de piedra y poderío, en sus ríos atávicos y eternos” translation: “There is no beauty like the beauty of America spread out in its hells / in its mountains of rock and power, in its atavistic and eternal rivers”. From just seeing the stills and video, I can feel the intensity and overwhelming emotion of this mural. I can just imagine how powerful it would be to stand before it.

Back to Yumbel and their deep tradition of the Feast of San Sebastian which is celebrated on both January 20th and March 20th. Thousands gather from near and far to visit the San Sebastián Sanctuary, participate in the procession (some on their feet and others on their knees), and light candles. This March’s was cancelled due to covid, but from what I’m seeing in 2016 there were 500,000 that made the pilgrimage. Now that’s passion.