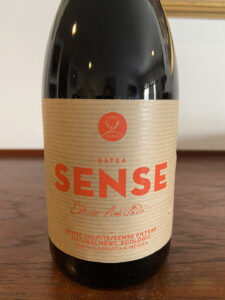 A glass of deep cheerful ruby. First sniff and there’s cherries and plums. Next is cinnamon/cloves and as it warms some honeysuckles, magnolias but delicately hiding in the background, and vanilla. It’s dreamy! Oh here’s juicy cherries, plums, raspberries and blueberries just dancing on my tongue along with a hint of super dark chocolate. There’s also a bit of anise. Wrap me in velvet. As much as I’d like to say a Snuggie, this is more refined and deserves a royal robe, some slippers, and a roaring fireplace.

Pairs with Cheez-It’s: Doesn’t change except makes all deeper

I got quite a surprise when I started looking into Celler Batea. It wasn’t a family run winery, but a co-op and a town that has a long history. This tale goes back as far as the Phoenicians and their trade route, but truly was sparked later in the 1950s. Wine was becoming more and more important financially, so winemakers/farmers bonded together…101 of them! I can only imagine how at first it must of been like herding cats. Eventually they got Celler Batea, up and running while still tending their own vines, and by 1961 were rewarded with their first vintage. Now there are 208 in the bunch and 250 hectares, and all of them take great care to keep it organic. That must be such hard work but shows such a pride and love of Terra Alta and its produce. Celler Batea has continued to listen to voices of change and in 2019 had their first wines with no added sulfites, in their Sense Blanca and Garnatxa Negre. And as I can attest, the Negre rocked my world, but you don’t have to take my word, they ended up with two gold medals: Gilbert & Gaillard, 2019 and Catalan Wine and Cava Contest, Girovi 2020, and I won’t be surprised if there are more to come.