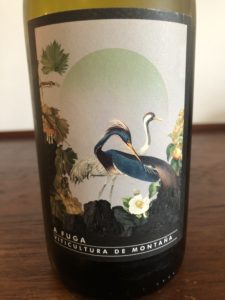 Super light straw color. Take a whiff and flowers like spring fruit blossoms appear, then melon, citrus, some smoke, and slate that’s just been rained on. First sip and this has much more depth than I expected. Next there’s melon, smoke, a little citrus, and lovely honeysuckle.

Adegas Moure and Abadía da Cova’s history starts back with a single man, Baldomero Moure Pérez. Born in 1892, he wanted more and left A Cova, Spain for Cuba. There he found employment with the railway and a way to save for his future. After his return to Galicia, he settled down with Carmen López Moure, and this led to pave a way toward wine. With her inheritance of land in A Cova and his savings, they continued to buy surrounding farmland, and then lay the foundations for their vineyards, the wines, and their spirits. Through the generations, the winery grew and refined their trade. Now it is the fourth generation (Paloma, José y Adrián) who continue the traditions and passions of the vines and grow forward. Also in 2018, they brought in the acclaimed winemaker Nacho Álvarez.

Before I start traveling, I have to comment on the beautiful and surreal label by the artist Annita Rivera (also know as Plástica). The haunting grape leaves stare back with their singular eyes, and a mini monkey hangs out with the grapes. The flower may be a camellia, but I’m no botanist. I’m also not much of a birder, and had to reach out a friend to see what the two central ones are. I’m told the white one is a Sandhill Crane and one darker one seems to be a Tricolored Heron that the artist took some liberties with. If anyone else has any input on our feathered friends…please let me know.

Let’s head to Lugo. Starting off with the Muralla Romana de Lugo which is a Unesco World Heritage site. These Roman walls are the only ones in the world that are left intact. From what I’m finding, the walls were constructed between 263 and 276 A.D. There is a tale that they were built to protect the “Sacred Forest of Augustus”. Either way, if it was to protect trees or a city from Germanic invaders, they are a beautiful piece of Spain’s history. Inside the walls you will find the Lugo Cathedral. It’s a mix of architectural styles, such as Baroque, Gothic, Neoclassical, and Romanesque. The images of the interior are truly glorious. The Chorus is filled with the incredibly detailed walnut woodwork by Francisco de Moure (17th century). Words do not do it justice, so please do click the link to view. Same goes for the main chapel which is an artwork overload to the senses, and contains paintings by José Terán and Corniellis de Holanda’s altarpiece. One more place I want to stop by is Parque de Rosalía de Castro which is named after the famous poet. Evidently her favorite flower was the camellia which is also the Galician official flower. Camellias were introduced to Galicia in the 1700s by Portuguese sailors, and they are now abundant through the region. Such a beautiful flower that also had another use for the sailors. As they learned from trade in China, the leaves can be dried to make a tea rich in vitamin C, which is perfect for sailors that are trying to ward off scurvy.

Lugo, you are a beautiful and history rich find. I’m so thrilled to have been introduced to you!